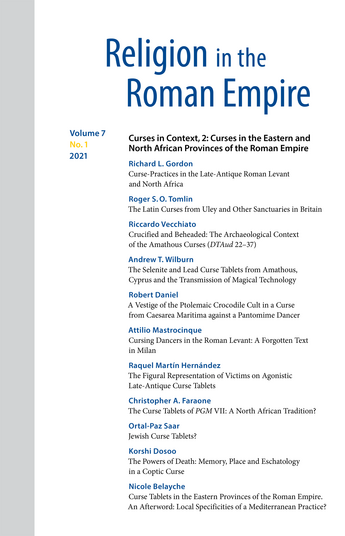 The Latin Curses from Uley and Other Sanctuaries in Britain

Artikel PDF
DOI: 10.1628/rre-2021-0004
Almost three hundred Roman curse tablets have been found in Britain, two-thirds of them from just two temple-sites, that of Sulis Minerva at Bath and of Mercury at Uley. With a few exceptions, they are Latin texts inscribed on lead, and the great majority are 'prayers for justice', petitions addressed to a god by the victims of wrongdoing, usually theft. The writer typically asks that the thief be punished and the stolen property returned: that is clothing, money and other valuables, which at Uley included farm animals such as cows and bees. Only 18 of the 86 tablets found at Uley have been fully published, but a complete corpus is in preparation, and to illustrate the editing process this paper concludes with the first page of an unpublished tablet prompted by the theft of a sheep.
Drucken
Teilen
Personen
Roger S. O. Tomlin Keine aktuellen Daten verfügbar.