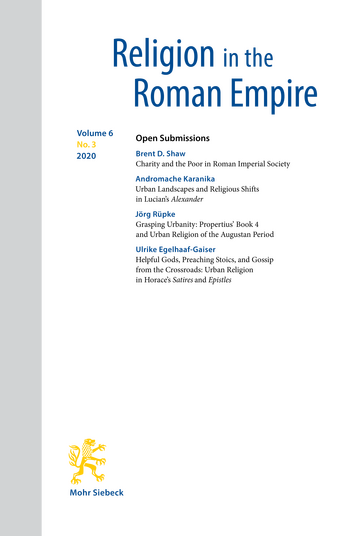 Charity and the Poor in Roman Imperial Society

Artikel PDF
DOI: 10.1628/rre-2020-0017
The relationship between moral codes of giving and the hard facts of poverty is complex and problematic. On the one side are different ideologies of giving adopted by persons possessing wealth and other resources. On the other are persons in considerable need who could be the recipients of giving by the well-off. But these two spheres of interest have overlapped only partially in the manner of a classic Venn diagram. Even in the special cases where the givers and recipients were linked by a hypothetical mutual interest and benefit – as with Christian charitable giving – the specific logic remains unclear. Rather than focusing on either wealth or poverty as such, the great social and material inequalities that underlay both are perhaps a better gateway to understanding the place of charity as a type of giving.
Drucken
Teilen
Personen
Brent D. Shaw Keine aktuellen Daten verfügbar.