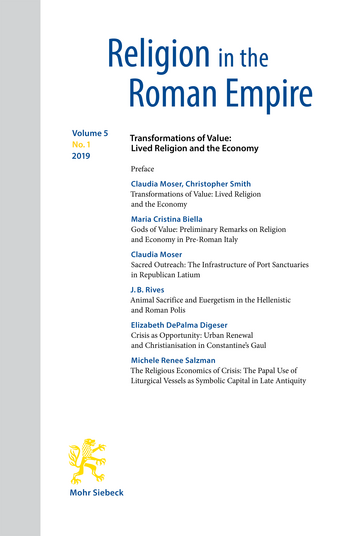 Gods of Value: Preliminary Remarks on Religion and Economy in Pre-Roman Italy

Artikel PDF
DOI: 10.1628/rre-2019-0004
Freier Zugang
Zum Text
This paper argues that the monumentalisation of sanctuary sites, and the practice of depositing votives in the form of bronze figurines, can be understood as a bridge between economic and religious behaviour. The first activity channels community resources and an examination of architectural terracotta decoration can thus reveal rational decisions concerning resource allocation. The second activity may be considered as part of the same nexus of behaviour which would operate with weights and measures, including coinage. Both reflect transformations of value through religious spaces and behaviours.
Drucken
Teilen
Personen
Maria Cristina Biella Keine aktuellen Daten verfügbar.